Topics under for PhD projects in computer networking

We also have many topics under computer networking domain due to its interdisciplinary nature. Lets discuss about each topic in brief. Under networking, we can work on most recent technology like mobile computing and mobile cloud computing. We also dont have any specific area to be worked as we are specialist in all the domains. Another major domain under networking is MANET i.e mobile adhoc networks. Under this we can also work on VANET i.e vehicular adhoc networks, wireless adhoc network and its security issues. Adhoc network is also a network which is based on infrastructure less communication which makes it best suited for todays need. We also have major technologies like Bluetooth, zigbee etc based on this domain.

Security is also a major concern in every domain. In networking, it is most significant area as transmission of data in a secure manner is a basic need of every communication. Networking is also a fundamental of every IT companies today. Such a huge companies, will surely focus on security issues which makes security as ever flourishing need. Scholars can also work on Network security, Wireless network security etc. All these are ever growing needs and will always have a broad scope. Other than these, we also work on parallel computing, software defined networking, wireless communication, Mobile communication, wireless networks, wireless sensor networks, wireless mesh network telecommunications, video streaming, Internet of things etc.

We can also work on the most important and basic concept of networking i.e IPv4 and IPv6. Under this field, we have many recent concepts to be worked upon. Scholars can approach us; we will also explain each area completely which can also give scholars an insight about networking. These will be helpful for scholars to choose their topic of interest.

WE FOCUS ON YOUR INTEREST……………
AS WE BELIEVE RESEARCH IS A PASSION……………
IT SHOULD BE ACCOMPLISHED WITH JOY………….

There are also many routing protocols in computer networking which has its own importance and need. What is a protocol? it is also just a set of rules which anybody can create. Routing protocol is also used to specify how the routers communicate with each other. It is the basis of networking where there are plenty of issues to be worked upon. Each protocol has its significance and also issues, which we need to, identify and worked upon. Sometimes, few scholars may wish also to create their own protocol. We are happy to appreciate such scholars and if they need any support from us, we are also pleasured to help them.

Here we have enumerated few protocols for scholars reference but we are not confined to only these protocols, we work on every new and recent protocol.

We also have discuss above important areas and protocols in computer networking. Other major aspects to also work upon in networking are attacks and parameters. A computer networking is also the best domain for research due to its wide scope and issues. We can also work on its parameter, attacks, protocols etc ,if we take each of these area, we have plenty of topics to be worked. For scholars, it may also difficult to choose a topic, but due to specialization in this domain, we can easily find any issues. We have also work on every small issue of networking which is the reason we can focus on every minute concept of networking. Lets discuss few topics under Networking parameter and attacks.

We also have enumerate only few attacks and parameters for just the purpose of basic understanding. Scholars can also contact us anytime, for more concepts and information. We also will send our complete list of all the topics and concepts under networking. Our experts will also guide to take best topic based on the recent needs and also technologies. If you wish to stand out in the field of networking, we can also help you to shine best in this domain. Your need is our promise. 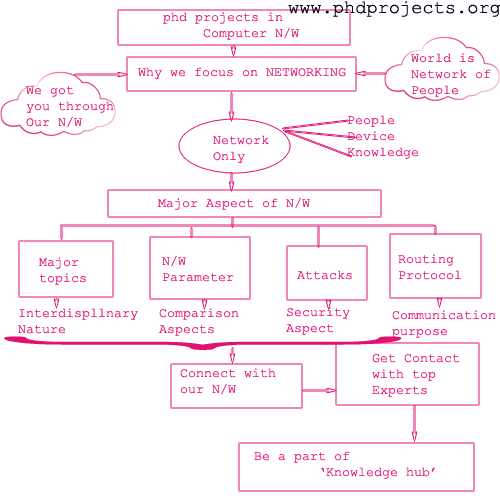 1.How will you prepare the proposal?

we prepare the proposal for the paper according to the top journal level like SCI. we refer all the SCI journals and create standard proposal for our scholars.

2.For complete networking Phd project, how much do you charge?

We charge according to the following factors:
Total thesis pages
Number of journal published
Overall requirement

3.How much time do you need to publish a paper in journals like SCI and scopus?

It is completely based on the journal. for SCI, we need 75 working days and for Scopus , we need 15 to 20 working days.